General Meeting of the  Society held on 25th January, 1936, at 1.30 p.m. at Commercial Buildings, South Mall, Cork,
Mr. N. Hayes (Vice-Chairman) in the chair, also present a large attendance of the members.

General Meeting of the  Society held on 25th January, 1936, at 1.30 p.m. at Commercial Buildings, South Mall, Cork, Mr. N. Hayes (Vice-Chairman) in the chair, also present a large attendance of the members.

VOTE OF  SYMPATHY        Before entering on the business  of the Meeting, Ald.

REPORT & STATEMENT    The report and Statement of Accounts, the latter

OF ACCOUNTS                    which showed a loss of £968 on the year’s working, was adopted on the motion of the Chairman, who pointed out that our general expenses exceeded our receipts by £1,395:2:4, but that in that account we had to provide for bad debts, £600 of which was left due by the Southern Greyhound & Sports Co., Ltd., who went into liquidation. Turning to the Shows he (the Chairman) said there was a profit of £434:7:7 on the Spring and Summer Shows, but that this was very much below previous years, especially in the case of Summer Show.  Some improvements to the buildings and grounds were carried out during the year, but we could not do as much as we would like to, as it was necessary to restrict expenditure in order to protect our financial position.  This was seconded by Ald. W. Desmond and passed unanimously.

RE-ELECTED PRESIDENT   Clarke, of Farran House, Farran, was re-elected President of the Society for 1936. This was seconded by Mr. E. Burns and was passed unanimously, with applause.

RECOMMENDATION         The next item was to consider the  following recomm-

“This Committee recommend to the Annual General  Meeting  of the Society that the Rules regarding the retirement and election of Members to the General Committee of the Society be not put into operation, but that the same Committee as elected in January, 1935 be re-elected for the coming year, and that this be regarded as a temporary alteration to meet the special circumstances of the year 1935”/

Mr. Clarke then proposed that the recommendation of the General Committee be accepted, and this was seconded by Mr. J. O’Regan.

Mr. Lehane proposed that the  resolution be not accepted, and this was seconded by Mr. A. Mullins.

MEETING ADJOURNED     A long discussion followed and it was eventually decided, on the motion of Mr. P.J. Halliden, seconded by Mr. D. Cronin, that the Meeting adjourn to Saturday, 14th March, and that the same agenda be sent out for the adjourned Meeting. 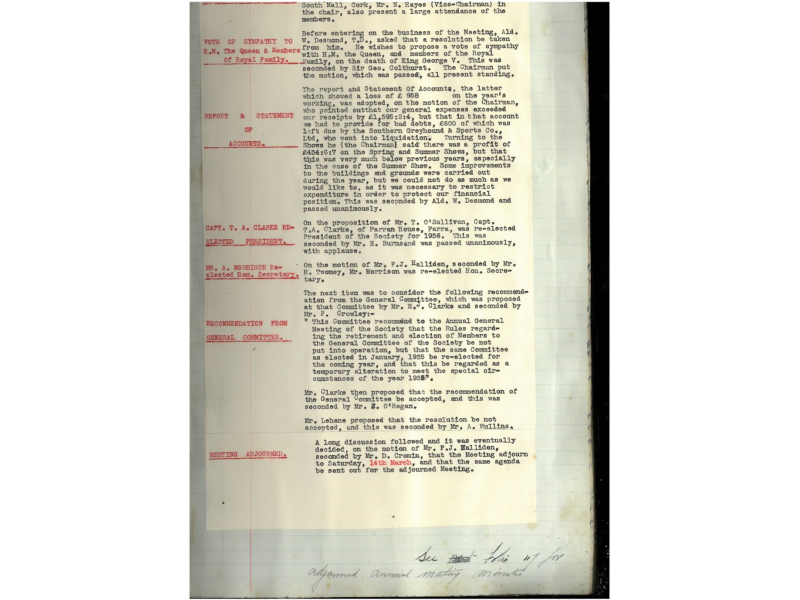