The minutes of the last meeting were read and signed.

The following new members were elected:-

On the motion of Mr. P. Crowley ,seconded by Prof. Boyle ,the following cheques, as recommended by the Finance Committee were passed :-

Acknowledgements of the resolutions of sympathy were received from Mr. J.R. Cross Ravenswood ,Carrigaline , and from Mr. L. Dobbin  junr., Knockrea  Park, Douglas Road in their recent bereavements and the Secretary was instructed to insert same in the Minutes.

On the motion of Miss Gubbins ,seconded by Mr. Desmond  , the three retiring members from the Finance  Committee ,viz:- E.J. Clarke ,J. Barrett, and N. Hayes  were re-elected.

Mr. E.J. Cussen ,Secretary  of the Co. Cork Farmer’s Union , attended the Meeting in connection with a suggested scheme of lectures. The invitation, which he had received there had arisen from a suggestion made that the Society might profitably  engage in functions other than the holding of Shows  once or twice a year , and the Society in its capacity of an educational  Body, should undertake  to provide lectures of the kind which would be appreciated by the farmers and the general community.  After  some discussion  on the suggestion made by Mr. Cussen, Mr. F.G. Hayes said the idea was excellent, but it would involve considerable  financial difficulties. He moved that it be referred to the Finance Committee. Professor Boyle proposed that, before referring the matter to the Finance Committee  a small Committee  should be appointed to interview Mr. Bohane, Director  of the Royal Dublin Society, on the question  of musical recitals and lectures, as it may be possible  an arrangement would be come to with the Royal Dublin Society ,that the artists  and Lecturers they would engage may be induced to come here at very little expense  to the Society. This was seconded by Mr. A. Mullins and proposed by Messrs. Crowley  and Barrett  and after some further discussion , Mr. Hayes  accepted Professor Boyle’s motion ,which was agreed to .Professor Boyle ,Mr. E.J. Clarke ,Mr. T. O’Sullivan  and the  Secretary  were instructed  to interview Mr. Bohane during the week of the Bull Show in Dublin.

In connection with the importation of German Horses into Ireland and England , on the suggestion of Mr.Desmond  it was  decided to invite Mr. Edward Walsh ,Buttevant ,to next meeting to address the members on the matter.

I am in receipt of your very kind letter of the 19th inst., conveying the resolution  of sympathy passed by your Committee. I very  much appreciate this resolution .It is a comfort to know I have so many sympathetic  friends .Please convey my sincere  thanks to the Members, and also accept  the same yourself for your sympathy.

Please convey  my grateful thanks to the Committee of the Munster Agricultural  Society for their kind sympathy for my great loss.

Very  many thanks for your letter. Please convey to your Committee  and members my sincere thanks for their kind sympathy with me on the death of my mother. 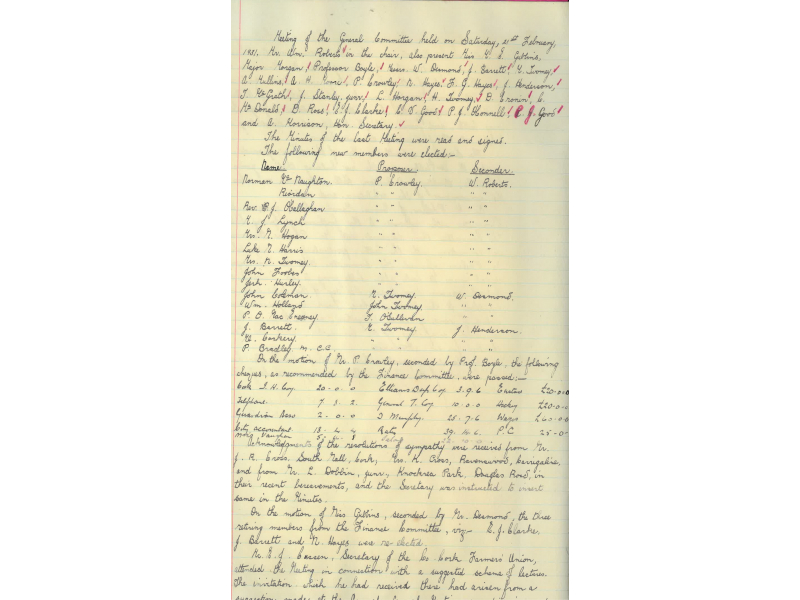 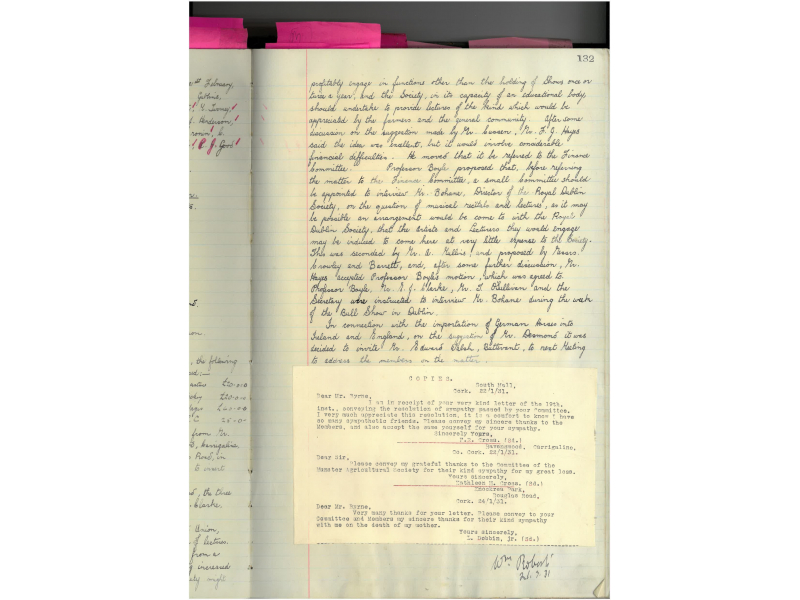