When the Summer show prize list  came up for their Consideration  , they would deal  with the question of the jumps.

A letter was read from Mrs. C.W. Fielding regretting she  could not  attend the meeting through  being laid up  with a cold.

On the motion  of Mr. Short seconded by Miss Patten  a vote of condolence was passed  to  Mr. Dobbin on the death of his mother, Mr. Fielding  stated  in her  letter  she  wished to  be associated  with  it  and the Secretary  who  was instructed  to forward the  resolution  to Mr. Dobbin  also wished to be  associated  with same.

Mr.  T. O’Sullivan proposed  that the motion ,which he proposed , and which appeared in the Minutes of December, 1930, be considered  and he now begged to move the following resolution  ,which was seconded by Mr. A.H. Moore, and agreed to :-‘’That the Dean of  Faculties  of Dairy Science ,University College Cork, be an ex-officio  member of the General  Committee  and that  the Committee  recommended to the annual general meeting to add the above to rule 7 of the  General Rules and  Regulations governing the Society.’’

Mr.  T. O’Sullivan  pointed  out that  there  were  a great many people  members  of the Society  at a fee  which  does not justify their being members  and after some discussions, it was  decided  to refer the matter to the Finance Committee.

Mr. J. Barrett  referred to the condition  of the road to the Show Grounds  and said the matter  should be brought to the attention  of the Cork Corporation  before they considered  their  annual estimate , and he proposed that the Corporation be written  to on the matter .

This was seconded by Mr.  T.O’Sullivan and was agreed to.

The Secretary submitted  a return showing the attendances for the members  of the General Committee for the past year  and according to the rules of the Society ,eight members  should retire  , and are not eligible  for re-election. The members were as follows:-

Capt.  W.R. Clarke, C.A. Love, D.J. Lynch, J.D. O’Sullivan, Wm. Richardson, Major. A.H. Watt, W.A. Whitelegge. The following had the same number of attendances: - Geo. Logan, J. O’Regan, Thos. McGrath, Hugh Twomey, and as one of these should go out lots were drawn to determine which member should remain in. It was decided that the last named out, had to retire. Mr. J. O’Regan, being the last named out had to retire. Mr. Daly said it  was not to the advantage of the Society  that a member should be put  off the General Committee simply  because he was short one attendance  to qualify. He thought  there  should be a Rule where by  a member who secured  a certain number of members for the Society  should be  made a  life-member  of the Society. Mr. D. Cronin said he would resign from the General Committee  in favour  of Mr. O’Regan, and Mr. Daly then proposed ,  and Miss  Gubbins  seconded, that a recommendation  be made to the annual general meeting that a new rule be added to the present rules ,that life members be elected on payment of a subscription of £20,or any member who obtained 30 new members within the year. The motion was passed. The four outgoing members who were longest in office ,viz:- J. Barrett, E.J. Clarke, J. Daly, V.S, Miss. M.E. Gubbins, who were eligible for election, were proposed by Mr. M.Twomey , and seconded by Mr. C. McDonald, Mr. D. Ross proposed that, in order to facilitate the counting of votes at the annual general meeting ,the names appearing  on the Ballot paper be numbered .In reply to a member the Sec. stated that the members proposed were arranged in alphabetical order. Mr. J. O’Sullivan  proposed that  the names be arranged as in previous years. This was seconded by Mr. J. Barrett and, after some discussion, was passed. 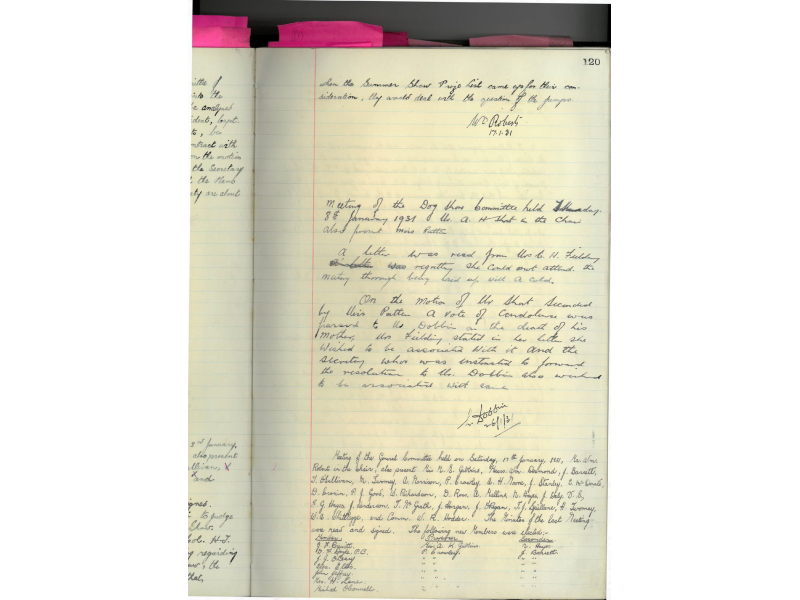 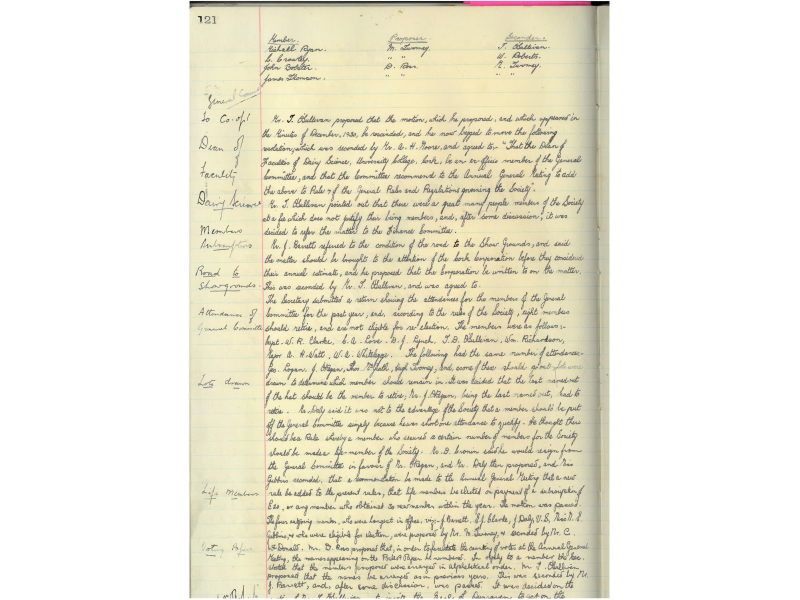