The President Capt. Clarke in the chair and there was a large attendance of members.

Annual General Meeting  of  the  Society held  at the Commercial Rooms South Mall Cork, On Saturday , 30th January, 1932. The President Capt. Clarke in the chair and there was a large attendance of members.

The minutes of the last meeting were read & signed .

The Secretary read the annual report  for the year  and  the accounts  as submitted by Messrs. Atkins Chermside  auditors  was taken  as read. The President Capt. Clarke explained the details relating to the a/cs  and after  a short discussion on the motion of Capt. Clarke seconded by Mr. P.J. Halliden  the accounts  were adopted . A suggestion  of Mr. R.B. Martins that the accounts  should be presented  so as not to  make them look  as if then Socy was  worked at a loss. Looking at  the balance sheet in the light  with which the first  figures  met  the eye  made  it appear as above.

It was agreed  to refer the matter to the auditors.

On the motion  of Mr. T. O’Sullivan  seconded by Mr. T. Kiely  The president  Capt.  Clarke  was unanimously re-elected  President for which he returned thanks.

On the motion  of Capt.  Clarke  seconded by Mr.  T. O’Sullivan  the following were elected  to represent the Counties of Munster  outside Cork,

The following motion  which was proposed by Mr Stephen Graham  & seconded by.

Mr. N. Hayes was passed:- That in further the meeting known  as the Half-  yearly  meeting should not be  held.

An amendment  moved by Mr. Corcoran was not seconded .

The following was  proposed by the President and seconded by  N. Hayes & passed:-‘’That  rule 9 paragraphs  3 and 4 ,governing the election of the Show Committee ,be amalgamated  and altered  to read  as follows:- The Show Committee  shall consist  of nine members  elected  from among  the members  of the General  Committee. The three members  giving  the least  number  of attendances  shall retire annually , but shall be  eligible  for –re-election if they  are still members of the General Committee. The  vacancies  thus made  shall be  filled up by the General Committee  at the October  Meeting. Nominations  for all  Candidates ,except the retiring members ,must be handed in at the September Meeting and nominations for the election of the retiring Members may be handed in on the day of election.’’

That members who cease paying their subscriptions shall pay a double subscription the first year they desire re-admission. Passed. 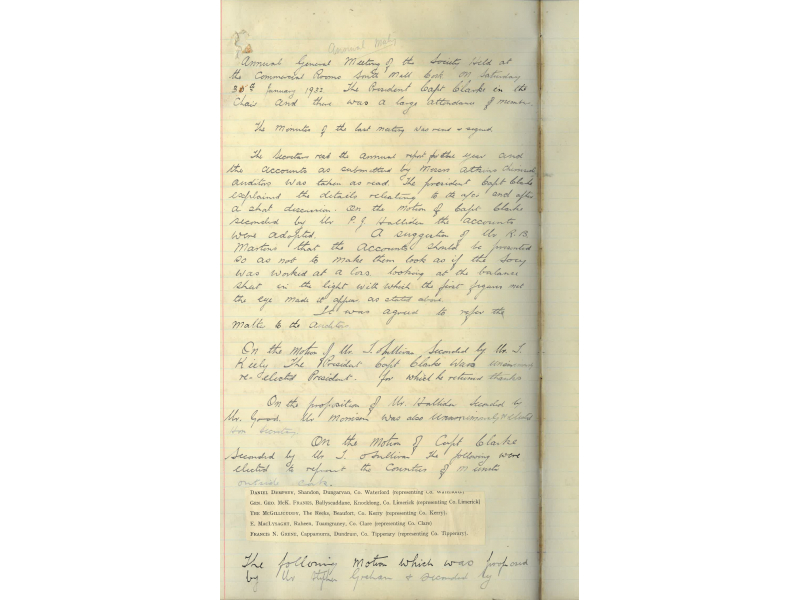 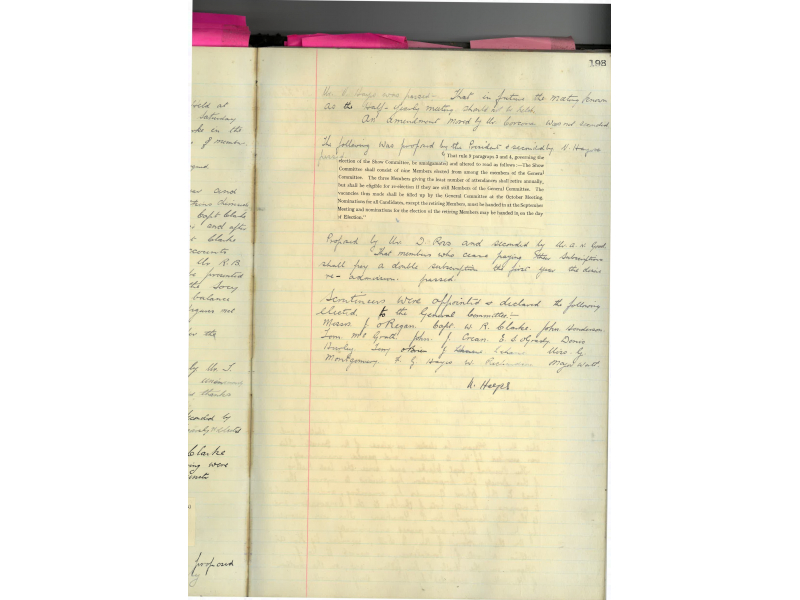