Adjourned Annual General Meeting of the Society held on 14th March, 1936,
at 1.30 p.m. at Commercial Buildings, South Mall. Mr. N. Hayes presided and there was a large attendance.

PUT INTO OPERATION      to the General Committee of the Society be not put into operation, but that the same Committee as elected in 1935 be re-elected  for the coming year, and that  this be regarded as a temporary alteration to meet the special circumstances of the year 1935”.

Mr. Clarke said they all knew the history of the resolution – it came as a recommendation from the General Committee to the Annual Meeting at the end of January.  It did not meet with unanimous acceptance there and it was not passed, but since then they had consulted together and the result of their exchange  of views was a unanimous understanding which had cleared the air.  This would give confidence to exhibitors and State holders alike, and the Summer Show would be held in an atmosphere of harmony and goodwill.

Mr. P. Crowley said it gave him very much pleasure to second the proposition.  The Chairman put the motion to the Meeting and there being no amendment, he declared it passed unanimously.

The Secretary then read out the names of the Committee as follows:-

VOTE OF THANKS               Mr. A.H. Moore proposed a vote of thanks to the ladies who had  given them so much help in the running of the Restaurant at the last and previous Shows. Miss  Gubbins seconded, and this was passed unanimously. 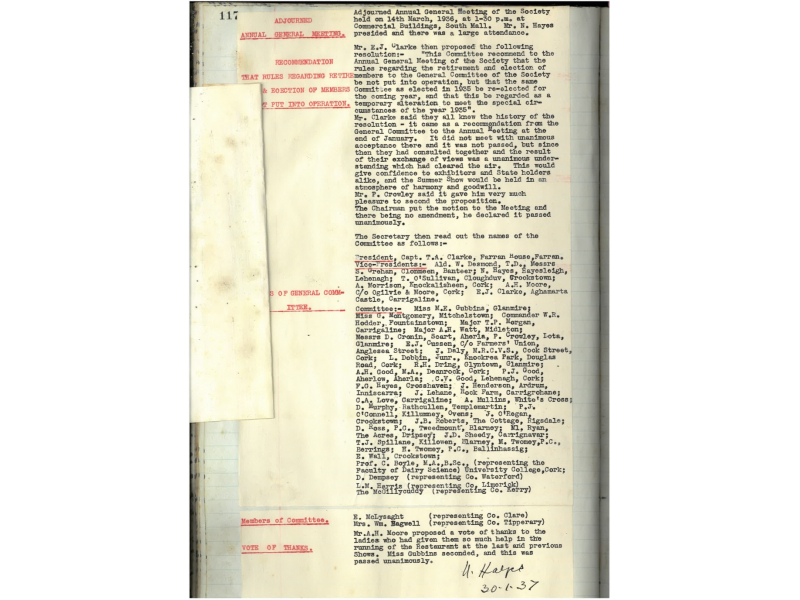